The 4 Cycles of Irish Mythology

Irish mythology consists of four major cycles: the Mythological Cycle, the Ulster Cycle, the Fenian Cycle and the Historical Cycle (or Cycle of Kings). The content of these stories reflects the change in Irish culture through time. For instance, as religion moved from early Paganism towards Christianity, the protagonists of the stories moved from gods to kings and the plots moved away from the supernatural towards the factual. With this came a shift from entirely mythological to more factual.

The Mythological Cycle is the earliest cycle and is the least well preserved. It tells stories of gods and supernatural events. The contents of these stories reflects the fact that they were written in times of paganism, before Christianity came to Ireland.

This cycle narrates through five migratory invasions of Ireland. It is an interesting Cycle as, instead of telling how people came to be, it tells of how people came from elsewhere to Ireland. Within the Mythological cycle there are hundreds of tales in prose and verse, some entirely mythological and some pseudo-history. One of the best tails is that of the Children of Lir.

As the rule of Tuatha Dannan, the 5th invader of Ireland, came to an end, there was a competition to find the new king. The finalists of this competition were Lir of Derravaragh and Bobh Dearg of Munster. Both were worthy kings but Tuatha Dannan chose Bobh for he had a wife and children; and was therefore a more compassionate man.

This result angered Lir, so to appease Lir, Dearg invited him to the castle to feast for three days and nights. At the end of this feast, Dearg offered his daughter Aobh to wed Lir.

Aobh and Lir were wed and she bore him four children; Fionnuala, Aodh, Fiachra and Conn. To the devastation of Lir, Aobh died in the birth of their twins. He had loved his wife very much and was crushed by her passing. He filled his life with his children to avoid the pain.

In an attempt to console Lir, Dearg sent Aoife, one of his other daughters, to wed Lir. Lir, however, was so enamoured with his children that he did not give Aoife the attention she desired. This made her bitter and angry. To get her revenge on Lir, she cursed his four children to become swans for 900 years; 300 years in Lough Derravaragh near their father, 300 years in the sea of Moyle and 300 years in the waters of Irrus Domnann. The curse would be undone when a king’s son from the north married a king’s daughter from the south.

Lir, realising his children were missing, went hunting for them. Eventually, he heard their voices from a river, but to his surprise these voices were coming from 4 swans.

Lir spent the next 300 years with his children, entertaining them to help them forget the fact that they were swans. The time came for the children to move. They bade their father good bye and promised they would return in 600 years.

After a difficult 300 years in the turbulent sea of Moyle, the children were happy to move onto their next and final location. They took a detour to fly over their father’s land only to find that he and his people were no longer there. With heavy hearts they began their final 300 years as swans.

Finally 900 years were up and the swans became human. But they were old and without the magic to sustain them; and therefore sadly died, but not before they could be baptised into the new religion of the land; Christianity.

This cycle contains tales from the first century AD; a time of heroes and warfare. These stories center mainly around heroes within the Ulaid province. Specifically, this cycle tells stories of the King of Ulster; Conchobar mac Nessa, and the warrior Cu Chulainn (also known as Cuchulainn) along with their friends, enemies and lovers. Some characters from the mythological cycle reappear.

The stories of Cu Chulainn are some of the most exciting from the Ulster Cycle. I’ll start from the beginning, with his birth.

The Birth of Cu Chulainn 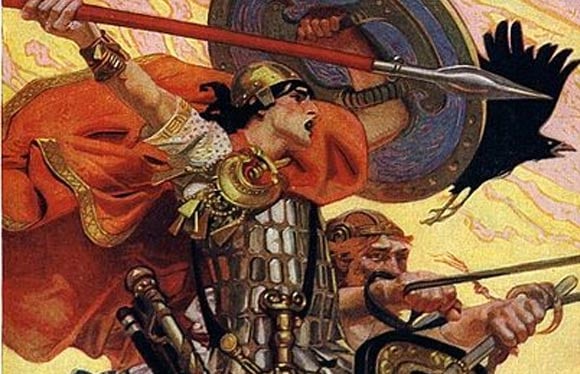 Connor the brave and powerful was the king of Ulster. He had a sister, Deichtre, who rivalled the king in her bravery and thirst for adventure. Being the sister of a king, Deichtre was expected to marry a nobleman – and so she was betrothed to Sulatim Mac Roigh.

On the morning of their wedding, Deichtre and her 50 handmaidens were getting ready in the castle. But, when it was time for the wedding to begin, they were nowhere to be found. Deichtre had run away for one last adventure in the Otherlands.

Soon after she arrived in the Otherlands, she accidentally swallowed a mayfly in her wine. Suddenly Lugh of Long Arm appeared before her and told her that as she swallowed the mayfly, she was to bear his child.

Back in the mainland, Connor and his men searched and searched for Deichtre. To mark a year of searching, they had a feast. During the feast a flock of 50 birds came and destroyed the castle’s crops. The men chased these birds into strange lands until nightfall. They decided to pause their search and find shelter for the night. They came across a hut which was, unbeknownst to them, inhabited by the heavily pregnant Deichtre and Lugh. One of Connor’s men asked for shelter in the hut overnight, Lugh and Deichtre agreed.

Connor requested the company of the lady of the house for the night, without realising this was Deichtre. He was told she could not join him as she had been taken by the pains of childbirth. Connor and his men went to sleep, but when they woke the hut no longer surrounded them. Instead they were on a bare hillside. Next to Connor was a cloaked woman holding a child. She turned to reveal herself as Deichtre. She confessed she had sent the birds so that her brother would find her and bring her and her baby back to the castle as she did not want to raise her child in the Otherlands.

This child was named Setanta under the instruction of Lugh, but was later renamed Cu Culainn after he slew the hound of Culainn the Smith.

The Fenian Cycle was written in the 3rd century AD and is based in the provinces of Munster and Leinster. The stories centre on heroes hunting, fighting and adventuring.
Most tales focus on the life of the brave hero Fionn Mac Cumhail (Finn Mac Cool). There are many stories about Fionn, but the story of how he gained his extensive knowledge is a particularly interesting one.

Finn MacCool (Fionn Mac Cumhail) and the Salmon of Knowledge

When Finn was a boy, he was sent to live with his tutor Fineagas. Fineagas had lived alone all his life and spent his time looking for the elusive Salmon of Knowledge. The salmon was known to swim in the river near Fineagas’ hut. Legend told that the first person to taste the salmon would gain the ability to look forwards and backwards in time and will gain all knowledge.

Fineagas regularly fished in the river, but had not yet come across the Salmon of Knowledge.

One day, Fineagas was teaching Finn Latin on the banks of the river when Finn noticed a commotion in the water. To the delight of Fineagas, it was the Salmon of Knowledge! He grabbed a net and started trying to catch the fish. He was sure to avoid the eye of the salmon, as anyone who gazed into its eye would fall into a deep sleep. He wrestled with the fish for hours until it finally tired out.

After the long struggle, Fineagas was tired so he asked Finn to cook the fish while he napped. Fineagas ordered Finn not to even have one bite of the fish, as only the first man to taste it gains its powers.

As the fish cooked, it spurted some water out which landed on Finn’s thumb. To stop the burning, he put his thumb in his mouth, not thinking that this would make him the first to taste the fish.

When Fineagas woke, he knew immediately what Finn had done for he saw a new light in the boy’s eyes. However, Fineagas was not angry, but he was happy for the boy.

Cycle of the Kings/Historical Cycle

This cycle was written between 200 AD to 475 AD; the time when Irish religion was moving from Paganism to Christianity. This is reflected in the changing content of the stories. The tales centered around kings rather than gods and lacked the supernatural aspect. This cycle contains more historical stories than the previous three, as well as myth.

There are a number of collections within this cycle. One of the largest groups contains stories surrounding Cormac mac Airt, the King of Ireland, and his ancestors.

Melody of the House of Buchet/Marriage of Cormac mac Airt

The king of Ireland, Cathaer Mor, had four sons and a daughter name Eithne. Eithne was under the care of a man named Buchet. Buchet was a farmer who owned many herds of cattle.

The sons of Cathaer would frequently visit Buchet and their sister and would squander Buchet’s possessions. Ultimately, Buchet was left with only 7 cows.

Buchet complained to Cathaer about the reckless behaviour of the sons, only to be told that Cathaer was too weak to control them. He told Buchet his only option was to run away. So one night Buchet fled with his wife, Eithne and the few cows he had left to Kells.

Cormac mac Airt was living in Kells at the time, before he claimed his Kinghood.

One day, Eithne was milking the cows and collecting water and rushes. Cormac saw her and approached her. He asked her what she was doing and who her master was. From this information he worked out that she was Eithne, daughter of Cathaer Mor, King of Ireland. He decided then and there he wanted her as his wife so he went and asked Buchet for her hand. However Buchet could not give permission as he was not her father.

Saddened at this news, Cormac took Eithne for the night. She escaped in the morning, but that night they had conceived a child. Eithne bore the child of Cormac and became his queen when he accepted his kinghood. In return for Eithne, Buchet was given all he could ever wish for. He could be heard from his house singing with joy.